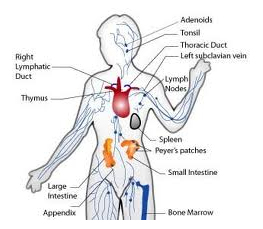 About the Immune System

The immune system, which is made up of special cells, proteins, tissues, and organs, defends people against germs and microorganisms every day. In most cases, the immune system does a great job of keeping people healthy and preventing infections. But sometimes problems with the immune system can lead to illness and infection.

The immune system is made up of a network of cells, tissues, and organs that work together to protect the body. The cells involved are white blood cells, or leukocytes, which come in two basic types that combine to seek out and destroy disease-causing organisms or substances.

The leukocytes (white blood cells) circulate through the body between the organs and nodes via lymphatic vessels and blood vessels. In this way, the immune system works in a coordinated manner to monitor the body for germs or substances that might cause problems.

The two basic types of leukocytes are:

A number of different cells are considered phagocytes. The most common type is the neutrophil, which primarily fights bacteria. If doctors are worried about a bacterial infection, they might order a blood test to see if a patient has an increased number of neutrophils triggered by the infection. Other types of phagocytes have their own jobs to make sure that the body responds appropriately to a specific type of invader.

T- cells = A type of white blood cell that is of key importance to the immune system and is at the core of adaptive immunity and the system that tailors the body’s immune response to specific pathogens.

Immature T cells (termed T-stem cells) migrate to the thymus gland in the neck, where they mature and differentiate into various types of mature T cells and become active in the immune system. There are several different types of mature T cells. Not all of their functions are known. T cells can produce substances called cytokines such as the interleukins which further stimulate the immune response. T-cell activation is measured as a way to assess the health of patients with HIV/AIDS and less frequently in other disorders.

T cell are also known as T lymphocytes (white blood cells). The “T” stands for “thymus” — the organ in which these cells mature. As opposed to B cells which mature in the bone marrow.

Here’s how it works:

When antigens (foreign substances that invade the body) are detected, several types of cells work together to recognize them and respond. These cells trigger the B lymphocytes to produce antibodies, specialized proteins that lock onto specific antigens.

Once produced, these antibodies continue to exist in a person’s body, so that if the same antigen is presented to the immune system again, the antibodies are already there to do their job. So if someone gets ill with a certain disease, like chickenpox, that person typically does not get ill from it again.

Although antibodies can recognize an antigen and lock onto it, they are not capable of destroying it without help. That is the job of the T cells, which are part of the system that destroys antigens that have been tagged by antibodies or cells that have been infected or somehow changed. (Some T cells are actually called “killer cells.”) T cells also are involved in helping signal other cells (like phagocytes) to do their jobs.

Antibodies also can neutralize toxins (poisonous or damaging substances) produced by different organisms. Lastly, antibodies can activate a group of proteins called complement that are also part of the immune system. Complement assists in killing bacteria, viruses, or infected cells.

All of these specialized cells and parts of the immune system offer the body protection against disease. This protection is called immunity.