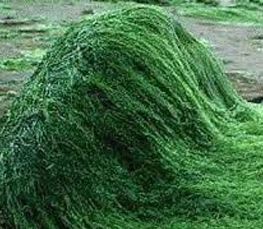 It is important that we maintain a balanced body pH of ideally around 7.2-7.4, which is roughly neutral. A diet of junk food to include fast food, over-cooked, processed foods, (especially soft drinks (the worst is cola), which have a pH of 2.7) creates a body that is several thousand times more acidic than our bodies. This is important because all diseases start and live and thrive in an acidic environment and do not live well in an alkaline environment. Thus it follows that to keep ourselves as alkaline as possible creating a healthy body. (Becoming too alkaline is rare but not unheard of.) The rise of fast, junk and processed foods match those of rising cancer rates.

• Spirulina is one of the many blue-green algaes (single-celled plants); named after its spiral shape. Algaes are incredibly old life forms, responsible for producing and sustaining our oxygenated atmosphere. They are the basis of the food chain and the primary source of food for the great baleen whales.

• Spirulina is not a salt-water algae; it grows in fresh inland waters. Due to being a prehistoric plant it is rich in nutrients and gives huge amounts of energy. Spirulina is potentially one of the most concentrated, nutritious foods on this planet. It is the highest natural source of complete protein. Hawaiian spirulina is regarded as being the best source because of its rich, clean waters.

• It is one of the oldest foods on the planet because it is a single-celled plant, it assimilates with almost no work from your digestion. In fact, your body begins to assimilate it right in your mouth and into your bloodstream.

• The high amount of sunshine makes the spirulina high in Beta Carotene. It is a rich source of B vitamins, especially B12 and it is also one of the richest sources of minerals. Spirulina contains chelated versions of potassium, calcium, magnesium, zinc, selenium, phosphorous, and iron.

• In addition to these beneficial minerals, you can get vitamins A and E vitamins from spirulina.

• Spirulina also has all nine of the essential amino acids, as well as nine more nonessential ones.

• Spirulina contains compounds like phycocyanin, polysaccharides and sulfolipids that enhance the immune system. In fact spirulina contains the most remarkable concentration of functional nutrients ever known in any food, plant, grain or herb. No other algae, blue-green or chlorella, has been the subject of such intense research over the past 30 years – there have been thousands of scientific studies.

• Spirulina contains the major long-chain omega-3 fatty acid (‘good’ fat) found in the brain. It is the primary building block of the gray matter of the brain and the retina of the eye.

• Spirulina is a rich source Gamma Linolenic Acid (GLA). GLA is an essential fatty acid that has been shown very helpful in the relief of arthritis. GLA also helps lower high blood pressure and blood cholesterol. It eases such other conditions as premenstrual pain, eczema and other skin conditions.

• Phycocyanin, which is the natural blue pigment of Spirulina, is not found in any other food on the plant. Phycocyanin has shown promise in treating cancer in animals. It also stimulates the immune system.