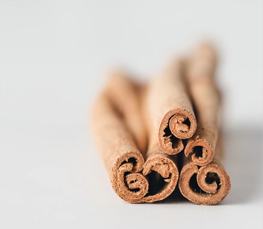 Is available as bark, shoots and sticks. The bark is mainly sweet, but also slightly hot and bitter; the shoots have a very different taste and are not so sweet. Both are warming and tonics. Cinnamon and whole barley soup is good for all kidney problems, balancing water volume, general tone and function and helping to cleanse the system. Cinnamon and cloves complement each other in cooking, warming and speeding digestion. Nausea, flatulence and diarrhoea can be helped with them. Cinnamon is chromium rich (chromium is important for blood sugar regulation) and can be used for those who have low blood sugar, hypoglycaemia and potential insulin resistance in the first stages. Diabetics must use under practitioner direction if using large doses/capsules but a little in food is fine.

A stimulant and is effective for warming the body, increasing circulation, improving digestion, alleviating nausea/vomiting and clearing phlegm. Cloves are also capable of inhibiting viruses and fungi as well as parasitic eggs. Use sparingly as the flavour is strong.

A great anti-viral herb. As a seed it is a good thickening agent. Helpful for stimulating digestion.

Is ‘cooler’ than some spices, but it still warms and aids digestion. It is one of the best spices for the relief of flatulence. It is also a stimulant and antispasmodic, useful to the heart and uterus.