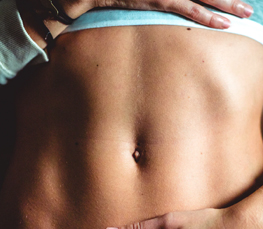 The cramp bark quickly reduces releases overly tense muscles in the gut and bowel which have contracted due to unbalanced digestive enzyme activity. Once the muscles relax and the tension and bloating reduces, digestive enzyme activity will more readily regain better activity. Additionally crampbark is soothing to the nerves and a calm mind makes for better digestion.

Is useful for chronic digestive infections on an immune level and also as a very competent anti-inflammatory herb. It can soothe and repair tissue that is damaged and upset by a range of digestive disorders from ulcers to gastritis and other painful inflammatory stomach disorders.

Has the ability to ease wind and bloating caused by ineffective, weak and hampered digestion. It can additionally stimulate appetite and relieve stomach pain. It is famous for being the main component in many colic formulae for babies.

Is useful for symptomatic relief of indigestion and other upper gastrointestinal conditions due to its calming influence on either a underactive or overactive digestive system. With its balancing pH abilities it is able to deal with either of these stomach acid production imbalances. It’s protective and demulcent properties protect the gut and assist ‘leaky gut’ and other problems.

Is a prime digestive, which stimulates enzyme production and soothes the stomach due to its very powerful anti-inflammatory components. It does this by protecting the stomach itself from its own acidity excesses and any invasive and destructive microbes e.g. bacterial, fungal or viral. This buffer will also help repair the stomach lining and help redress ‘leaky gut’ problems. Turmeric is also able to attack and disarm a range of microbes, which will prevent a build up of un-beneficial flora, which is often the negative product of a weak stomach.

A premier anti-inflammatory herb to relieve spasm, cramps and muscle strain, a vital role in this formula and much-needed to soothe and relieve pain. Also known as colic root to the Aztecs and used in Chinese medicine as a stomach tonic.

Will fight a wide range of microorganisms which can attack, weaken and impair the stomach and all its functions; from virus to fungi, from bacteria to flukes, and the diseases they encourage. For 4-6 thousand years olive has acted as a broad spectrum anti-microbial plant capable of aggressive attack mechanisms.

Strongest asset for the digestive system is twofold; it has 5 flavours, which gives it the ability to influence digestive enzyme production like none other. It is also a profound recuperative tonic making it a master choice for recovery from low energy and restoring vitality and general well-being.

Increases the production of bile (a chologogue) by up to 60%, helping and assisting in the digestion of fats; its bitter compounds activate the liver and gallbladder in order to do so.

Its bitter constituents stimulate the production of saliva and a balanced range of gastric juices. It is helpful for many symptoms of faulty digestion to and will retrain the pancreas, partly due to it’s bitter components. It tones and tunes the appetite, assisting the stomach, liver, gallbladder and bile production.

Is renowned as a stomach settler and soother, relaxing and balancing in turn the whole body. It also beneficially influences the circulation and nervous system. Chamomile is dully a natural probiotic as it regenerates positive stomach and bowel flora which is vital where overly opportunistic microbes have imbalanced stomach flora. Ideal for children.

Assists feeble digestion by its bitter action and improves liver and gallbladder congestion by stimulating bile and gastric juices. Highly useful in small quantities to provoke and strengthen.

Is a warming herb used as a traditional remedy for supporting and strengthening weak digestion. It also supports unbalanced blood sugar levels by nourishing the pancreas. The cinnamon essential oil motivates production of many important digestive enzymes.

Is helpful for digestion nausea, wind, bloating and colic. Anything that can be a miss with a struggling digestive system is calmed and soothed by ginger. It is warming, anti-nausea andrelaxing to an irritated and tense gut.

Found in high concentrations in the pineapple stems; bromelain is an enzyme capable of digesting proteins. Excellent anti-inflammatory too. It has activity in the stomach as well as the small intestine. It has been shown to be an adequate replacement for pepsin and trypsin (enzymes produced in the mucosal lining of the stomach that acts to degrade protein) in cases of deficiency and has been used to heal gastric ulcers (promoting healing).

Calm and soothe the mucus membranes. Both plants have rich mucilage (a gluey thick substance produced by some plants that acts as a membrane thickener) properties – making them ideal gastric and bowel repair and anti inflammatory herbs. Slippery elm causes reflux stimulation in the nerve endings in the GI tract leading to increased mucus secretion. The increased mucus production can help to Protect the GI tract against ulcers and excess acidity.