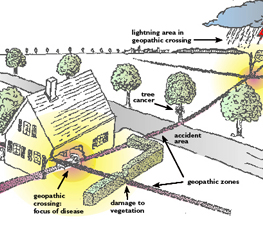 GEOPATHIC STRESS & EMR (ELECTROMAGNETIC RADIATION)
has been found to be the common factor in most serious and long-term illnesses and psychological conditions.

Geopathic stress and electro-smog have been found to be a common factor in many serious and long standing illnesses such as cancer, ME, sleep problems, cot deaths, fatigue, difficulty conceiving, learning difficulties and psychological conditions. For example, cancer as a disease of location has now become widely accepted amongst cancer specialists in Germany and other countries. “According to studies I have initiated, at least 92% of all cancer patients I have examined have remained for long periods of time, especially in respect of their sleeping place, in geopathically stressed zones.” Dr Hans Nieper, Cancer Specialist

What Are Electromagnetic Fields?

Electromagnetic fields (or sometimes called electrosmog or electrostress) are areas of energy that surround electronic devices. The World Health Organization (WHO) explains that the electric fields are created by differences in voltage and magnetic fields are created when the electric current flows.3
According to WHO, electromagnetic fields affect us because our human bodies have their own electric and biochemical responses (e.g., nervous system, digestion, brain function, heart function). So exposure to EMFs can interact with your body in adverse ways.

Most of our modern-day conveniences emit EMFs, some stronger than others. So does this mean you have to go off the grid?

Not at all! But if you are serious about achieving and maintaining your best health, there are several steps you can take to minimize the effect EMFs have on you and your family.