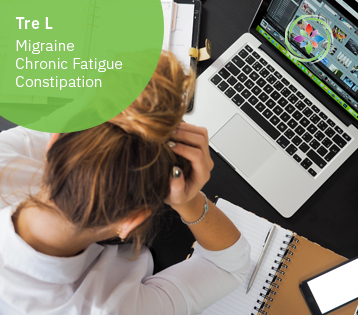 When Tre L. was first introduced to Kostas, at one of his presentations, she was suffering from a variety of unpleasant symptoms. She had been having regular ‘hormonal’ migraines for many years and suffering from frequent stress headaches. Tre also had a dust allergy that caused a lot of sneezing at night, hay fever (which had only started three years previously), tinnitus (ringing in her ear on most days), chronic fatigue, constipation, IBS, restless sleep and an unexplained pain in her right foot, which made walking difficult.

She had felt for a long time that her diet needed an overhaul and was not happy with her weight. Kostas’s presentation opened her eyes to many other factors that contribute to ill health. Soon afterwards, she started doing the breathing exercises advised by Kostas and noticed a difference fairly quickly; she started to sleep through the night and wake up feeling rested, her eyes started to feel more open and she had more energy.

After her first actual treatment with Kostas, she felt amazingly relaxed and rejuvenated. “Within the next few days, I noticed that the IBS symptoms had gone and I made it through my menstrual cycle without a migraine”, she said. The pain in her foot disappeared fairly quickly afterwards, too.

Tre then embarked upon the RejuvaDetox+ programme and received life-changing information and dietary advice from Lana. Whilst on the detox, although it was hard work, things gradually continued to improve. One month on, she felt like a different person!  “I’ve had no hay fever symptoms so far this spring”, she said, “and my dust allergy is a thing of the past!”

Although she still gets occasional headaches, she has learned how to reduce them using the breathing techniques, and no longer gets any migraines. The tinnitus has gone and the digestive problems are well under control.

Tre is also about 7lbs lighter and much slimmer. She says that her jeans became very baggy and she feels confident in her clothes again. Her skin is more radiant, clearer and smoother, and she looks and feels about  ten years younger!  Her eyes are brighter and clearer.

She reports having so much more energy, too:  “I used to feel debilitated by frequent day-time chronic fatigue. This very rarely happens now and I only start to feel tired at the end of a busy day, which is fantastic. I’m more productive now and I’m smiling more! Now that so much of the suffering has dissipated, I’m more aware of the positive sensations in my body and able to live from my heart! A priceless gift for which I’ll be eternally grateful.”

All in all, Total Health Now approach has had a very positive impact on Tre’s life and on the lives of those closest to her. She experienced a huge number of significant, positive, interior and exterior changes as a result of the treatments with Kostas, and the alterations to her diet and lifestyle.

Tre added: “I’ve also really enjoyed spending time with and getting to know Lana and Kostas, as they are very lovely people. It’s difficult for me to adequately express my gratitude towards them for their invaluable help, support and advice. They’ve helped me to cleanse, heal and re-balance my body and awaken my spirit. There is no doubt in my mind that what they’re offering is incredible value for money. I’d advise anyone to make the same wise investment in their on-going health and happiness.”