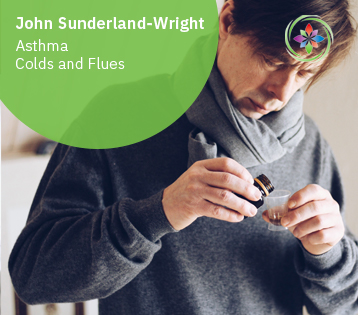 John Sunderland-Wright was an asthma sufferer and suffered with endless colds and flu during winter season. Bronchial problems often followed. Every winter he would have to take antibiotics to treat infections.

At the Total Health Now Clinic, where his progress was supervised for three months, he learned to have control over his well-being, giving him a real sense of personal power to make changes. He learned basic breathing techniques, along with few lifestyle, stress and sleep techniques.

John stopped taking medication for asthma and stomach problems. At the time of drafting this case study, he had not taken these for 15 months, and he had not even felt the need for them.  That winter had been the first time in his life that he did not need to go to his GP and have to take anti-biotic medicine. He has been taken off the list, at his GP surgery, for reminders to take peak flow tests and have flu vaccinations.

“Kostas has changed my life in the most positive way possible. His holistic approach to healing using simple, yet effective tools and techniques has [sic] given me confidence and a sense of control I thought was not possible”, says John.