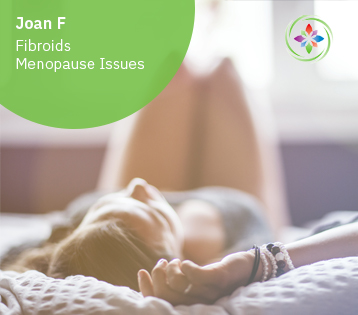 Joan F. had suffered from fibroids since her early 30s, 20 years before seeking the help of Kostas and Lana.  She had many issues that come about with menopause – hot flushes, etc – and had tried many ways of resolving these issues. However, she said that none of them rivalled the support and guidance that she received from Kostas and Lana.

At the Total Health Now Clinic, it was noted that Joan had very poor nutrition in her diet (mainly carbohydrates), excess consumption of protein and very low fibre. She had to change her lifestyle and learned how to use more vegetables and clean diet in her meals.

After doing the Health MOT, she said that she felt rejuvenated and lighter. She had a greater sense of general well-being; she felt healthier and fitter. Joan no longer felt the congestion in her lower abdomen. She can now sleep better at nights and does not wake up during the night. Through the work, guidance and support given, there was a general energy shift within her.

She said: “I would like to take this opportunity to thank Kostas and Lana immensely for their high level of professionalism, guidance and expertise”. She was under their supervision for around six months.