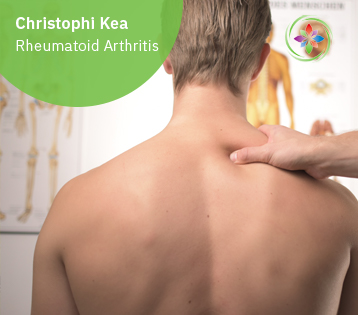 Christophi Kea was diagnosed with very aggressive Rheumatoid Arthritis (RA) – a chronic condition. His rheumatologist started him on a high dosage of Hydroxychloroquine and Sulfasalazine. Shortly after taking the medication, 80% of the symptoms had gone but Christophi wasn’t happy with the thought that he had to take this medication for the rest of his life, so he started seeking another solution.

A close friend recommended Kostas Kapelas to him. Kostas offered easy-to-understand explanations, nutritional advice and guidance. After eight months, the results were astonishing. He no longer had the need to take any drugs. On a further blood test, his rheumatologist was shocked by the results. All of the symptoms had gone!

Christophi was under the Clinic’s supervision for two months while undergoing treatments, and he has remained in touch for a further two years… taking recommended herbal supplements and maintaining a clean lifestyle, along with treatments every three months.

The bonus in his story is that he hasn’t had a cold, the flu or even a sore throat during the year. Previously, he was very vulnerable to catching winter ailments. Christophi is now having better sleep at nights and more energy during the day.

“I want to thank Kostas for his professional guidance and knowledge. [He] helped me to make a total health turnaround”, he said, adding: “Kostas is a fantastic motivator, an excellent holistic practitioner and I would highly recommend his services unreservedly!”

This website uses cookies to improve your experience while you navigate through the website. Out of these, the cookies that are categorized as necessary are stored on your browser as they are essential for the working of basic functionalities of the website. We also use third-party cookies that help us analyze and understand how you use this website. These cookies will be stored in your browser only with your consent. You also have the option to opt-out of these cookies. But opting out of some of these cookies may affect your browsing experience.
Necessary Always Enabled

Any cookies that may not be particularly necessary for the website to function and is used specifically to collect user personal data via analytics, ads, other embedded contents are termed as non-necessary cookies. It is mandatory to procure user consent prior to running these cookies on your website.