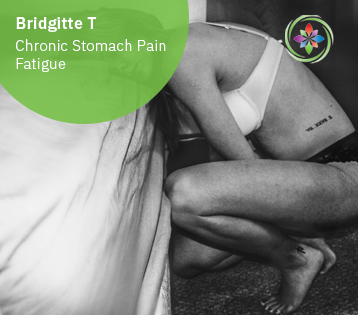 Bridgitte T. participated in a Breathing Re-training Course, from a distance!  Based in Colorado, USA, she kept to her regular appointments via Skype.

She had been suffering from chronic stomach pain and chronic fatigue for over 15 years.

The Breathing Re-training Course made an immediate impact on her life. She had always had trouble falling asleep at night and, for several weeks leading up to the course, she had many nights of insomnia.

After only three days into the course, Bridgitte was falling asleep immediately and sleeping through the night. This alone has greatly improved her quality of life.

Also, after about three weeks of following the breathing exercise recommendations, her cell tissues oxygenation doubled and reached the ‘safe zone’ according to an easy-to-follow breathing test. Once this happened, she had a noticeable improvement in her chronic digestive issues, and she was able to decrease the number of supplements taken at each meal.

During the re-training, Bridgitte experienced several cleansing reactions due to other chronic issues. Had it not been for the daily and then weekly support, she probably would have given up doing the exercises. Another benefit of the group course is that she learned a lot by hearing other people’s questions and experiences with the exercises, and she found the weekly follow-up meetings invaluable. They helped her stay on course as she developed new breathing habits. “Kostas’ positive energy is contagious”, says Bridgitte, adding “and it is clear that he really wants to help people through this class and not just sell himself or some products, as is so prevalent with online classes you’ll find elsewhere.”