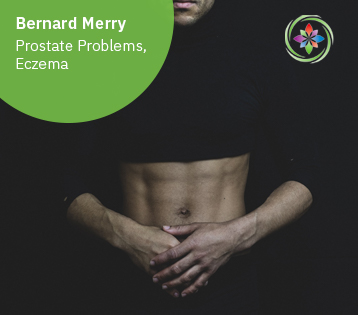 Bernard had prostate problems and bad eczema.  It was a six months’ journey to clear his scalp eczema.

He lost over 14lbs of toxic fat and inches on his waist, neck and arms. His trousers now are looser and his friends comment on how much better he looks. His allergy and eczema-like symptoms on his scalp have cleared.

Bernard sleeps better, he has better digestion, and his skin appearance has improved. He has also been able to stop his prostate medication altogether, and his cholesterol level went down to from 7.2. to 5.3.