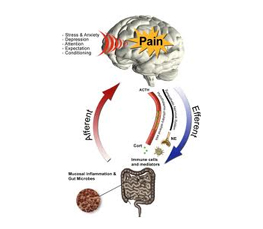 Both our gut and our brain originate early in embryogenesis from the same clump of tissue which divides during foetal development. While one section turns into the central nervous system, another piece migrates to become the enteric nervous system. Later the two nervous systems connect via a cable called the vagus nerve — the longest of all the cranial nerves whose name is derived from Latin, meaning “wandering.”  The vagus nerve meanders from the brain stem through the neck and finally ends up in the abdomen. There’s the brain-gut connection.

The gut’s brain, known as the enteric nervous system (ENS), is located in sheaths of tissue lining the oesophagus, stomach, small intestine and colon. Considered a single entity, it is packed with neurons, neurotransmitters and proteins that zap messages between neurons or support cells like those found in the brain.

Think why if you are nervous about a job interview…your stomach can get upset!

Get Your Free Lifestyle Analysis Here

This website uses cookies to improve your experience while you navigate through the website. Out of these, the cookies that are categorized as necessary are stored on your browser as they are essential for the working of basic functionalities of the website. We also use third-party cookies that help us analyze and understand how you use this website. These cookies will be stored in your browser only with your consent. You also have the option to opt-out of these cookies. But opting out of some of these cookies may affect your browsing experience.
Necessary Always Enabled

Any cookies that may not be particularly necessary for the website to function and is used specifically to collect user personal data via analytics, ads, other embedded contents are termed as non-necessary cookies. It is mandatory to procure user consent prior to running these cookies on your website.